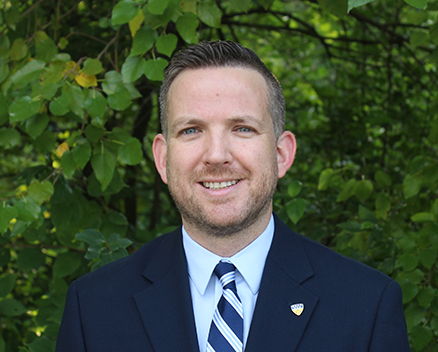 Dominic joined the Delta Upsilon staff in summer 2018 as Director of Health & Safety Initiatives. In this role, he oversees the implementation of Delta Upsilon's substance-free housing policy, develops resources for chapters, and works on the Fraternity’s alcohol education curriculum. He previously served on the DU staff as a Leadership Consultant from 1999-2000, then as Director of Expansion & Recruitment from 2000-2001.

Dominic rejoins the DU team with an extensive background in higher education and the fraternity/sorority community. Most recently, he served the North-American Interfraternity Conference as Vice President of Campus Operations for the mid-Atlantic and Northeast regions where he delivered campus support to fraternity communities and contributed to NIC educational and advocacy initiatives. Prior to that, as a campus-based professional, Greene’s experience spanned fraternity/sorority life, student activities, leadership development and residence life. He has served as Director of Student Activities at American University and as Director of Fraternity and Sorority Life at Northwestern University.

Dominic is a trainer with the Alcohol Skills Training Program (ASTP) and was the co-chairman for the Campus Coalition for Alcohol & Other Drugs (AOD) while at Northwestern. As a volunteer, he has also facilitated almost 100 interfraternal leadership programs, including the NIC’s Undergraduate Interfraternity Institute (UIFI), Impact and Alcohol Summit sessions. He has been recognized as Volunteer of the Year by the Association of Fraternity/Sorority Advisors (AFA), and Beta Theta Pi has also honored Greene with its Interfraternalism Recognition Award and Regional Volunteer Award for his work as a program facilitator and chapter advisor. He received Delta Upsilon’s William H.P. Faunce Interfraternalism Award in 2017. In 2019, Dominic received the AFA Sue Kraft Fussell Distinguished Service Award

He is also a member of the Association of Fraternity/Sorority Advisors and the Northeast Greek Leadership Association. Dominic serves as a volunteer for both Delta Gamma and Beta Theta Pi.

Dominic was born in Hawaii.